We met at Embudito but then Ken, Sue and Russ took our car and drove to Three Gun Spring. Meanwhile, Lee and I started hiking up the Embudito Trail. After a couple of hours on the trail we encountered our 3 friends as they were making their way up the mountain from the other side. We had lunch together, they handed us our car keys and the 2 groups parted ways to finish going back down the way the other group had come up.

After 8 miles of hiking it was good to find our car waiting for us, knowing we could just head home and nobody had to spend time doing a car shuttle. Embudito Trail and Three Gun Spring Trail are hikes that we have done before, but we’ve never had the opportunity to put them together in one nice day hike. We’ve done them separately and then it would be an up and back down hike because it would be too far to hike around the mountain to connect up with the car at the starting point.

No cats were harmed in the making of this enjoyable hike. 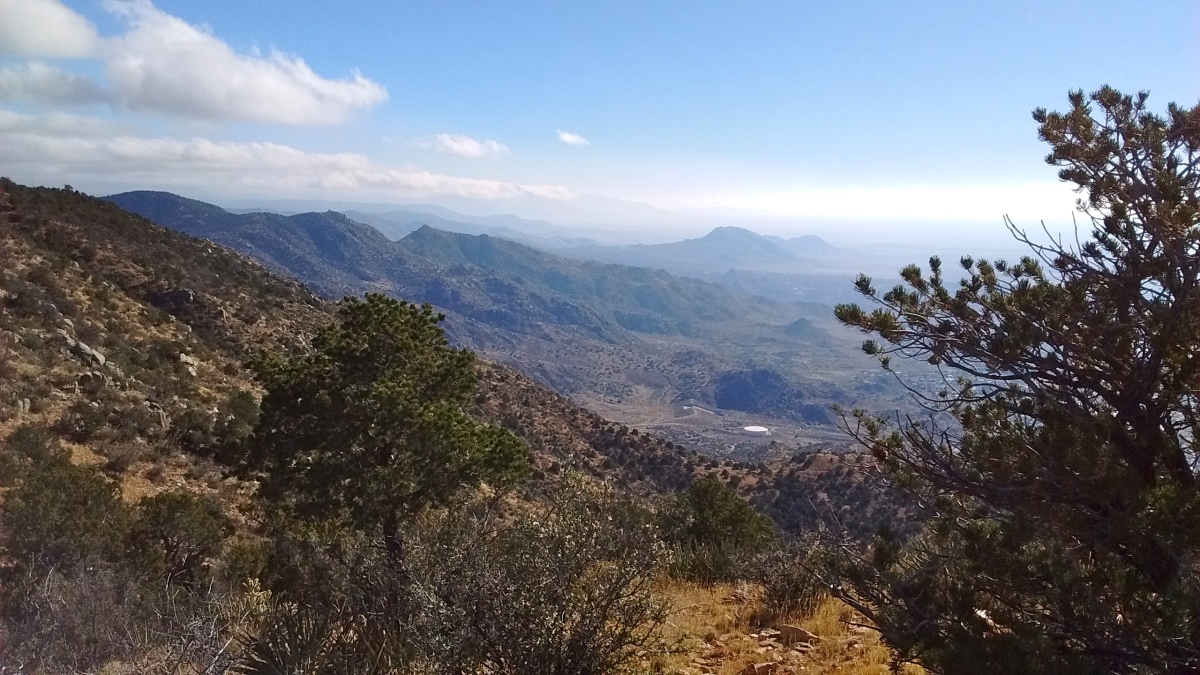 Because the Sandia Mountains are practically in the backyard of Albuquerque, we have done numerous hikes there in the years we have been here. Since it isn’t a big mountain range, you would think that we would know most of the trails by now. But yesterday our friends, Ken and Sue, introduced us to an interesting trail, labeled on some maps as the Whitewash Trail, but not appearing at all on other maps.

The hike required a shuttle, parking one car at the Embudido Trailhead in the foothills on the east side of Albuquerque. Then driving east of town through Tijeras Canyon we started the hike on the Three Gun Springs (Tres Pistoles) Trail. We have done that trail a number of times in various combinations, as it connects with a couple of other trails.

It’s a steep ascent for 3 miles up to Oso Pass, which is about a mile below South Sandia Peak on the Crest Trail. This is where we left familiar trails and took an unmarked trail heading west along a ridge that would eventually descend the mountain and get us back to the foothills. We could now see the advantage of hiking this Whitewash Trail in the Sandias that we hadn’t been on before. It had very distinctive views of the city, as well as views of the Crest towards the north and the south from different perspectives.

The fact that there are no trail signs for this trail wasn’t a problem in the beginning. It was easy to follow the trail along the ridge at the higher elevations. But once we got out to the more open areas and could actually see where our car was parked in the foothills below, that’s where the problems began. Somewhere along the way we got off trail and found ourselves scrambling over steep, rocky terrain, trying to make our way downhill without slipping and falling into a cactus or other obstacle.

It was a relief to finally reach level terrain in the foothills, but, unfortunately, we had gotten so far off course that we were not in the section of the foothills where our car was parked. It was another mile or so trudging through the desert before we rounded a hill and could see once again the parking lot that was our goal. I was quite exhausted after trekking 9 miles, a third of it a very steep ascent and a third of it trying to scramble back down the mountain. But, as is always the case, it was an enjoyable day spent doing our favorite outdoor activity.

I created an interactive map from the GPS track of our hike. If you click on the link for the map it allows you to zoom in and out and move around to get a better idea of where we were.
A map of the hike