In our many travels throughout the American West it is not uncommon to see a road sign informing us that we are crossing the Continental Divide. Unlike imaginary boundaries such as state lines or city limits, the Continental Divide is an actual physical feature of the landscape. Viewed on a map it is a squiggly north-south line running the entire length of North America from the Bering Strait in Alaska to the Strait of Magellan in southern Chile. As a physical feature it marks the point where rivers or watersheds on the east side of the Divide eventually flow into the Atlantic Ocean, while those on the west side flow into the Pacific Ocean.

If not for highway signs that indicate when the road is crossing the Continental Divide, there really is no way to know when you are on the Divide. Although it is generally following the line of mountain ranges, it doesn’t always go over the highest point on the landscape. A number of years ago an effort was begun to create a hiking trail from Canada to Mexico that would, as closely as possible, follow the line of the Continental Divide. The Continental Divide National Scenic Trail (CDT) is now about three fourths complete and a good portion of its 3100-mile length passes through New Mexico.  Although the idea of the CDT was to have it follow the line of the divide, this is not always possible. For example, in New Mexico portions of the divide are on private lands or Native American lands that the owners don’t want to sell or donate to the public. This summer we enjoyed two different outings that involved the divide, one on the actual divide and one on the CDT.

Memorial Day 2018 Lee suggested a hike on BLM land just north of Cuba, New Mexico, where Highway 550 crosses the Continental Divide. A couple of months earlier he’d explored the area on his own and was wanting to see if he could map out an informal hiking trail on the divide. I was more than happy to check it out.  We wandered up an interesting overlook and then through some scrub junipers, eventually coming out on a dirt road that lead back to where the car was parked.  It’s hard to say how much of our 5-mile trek was on the divide but it was an enjoyable exploration, anyway.

Later in the summer, on a nice day at the end of July, we did an out-and-back 7-mile hike on a portion of the Continental Divide Trail north of Mount Taylor in the Cibola National Forest near Grants, NM. We have been on portions of the trail at other times but this section was new to us. It was a nice day to be out in the woods even if it wasn’t the most scenic place for a hike.

We left Albuquerque early on the morning 0f March 18 for a hike near Reserve, NM, hoping that the rainy day weather forecast wouldn’t materialize. By 2pm we had completed a 7-mile out and back hike on the Continental Divide Trail just as the rain clouds started to sweep through the mountain pass towards us. A short drive took us into Reserve where we warmed up with hot tea and dessert at a small cafe. 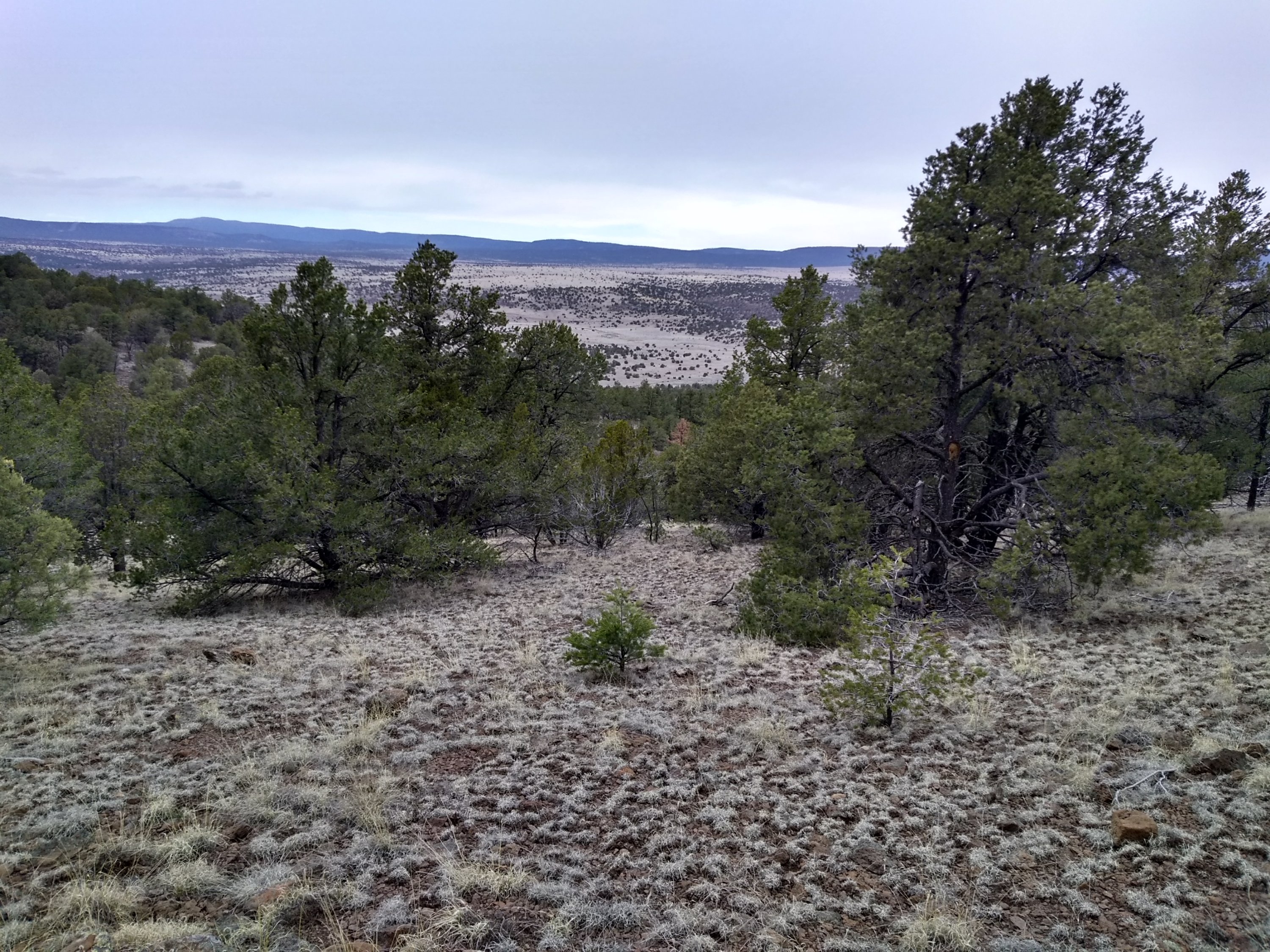 Rather than head back to Albuquerque after our March 18 CDT hike we drove into Silver City and rented a motel room for the next two days so we could investigate some of the sections of trail in the Silver City area. March 19 found us at the Jack’s Peak Trailhead where we endured more of an uphill hike to reach a turnaround point at 3-1/2 miles. Jack’s Peak itself could have been reached by exiting the trail and walking on the maintenance road that leads up to the towers on the peak. But we were content to view the peak through the trees before heading back down the way we had come. The rain from the day before had left some lingering morning snow flurries on the mountaintops around Silver City. As the day warmed the sun made short work of the snow on Jack’s Peak but we did catch a glimpse of whiteness. 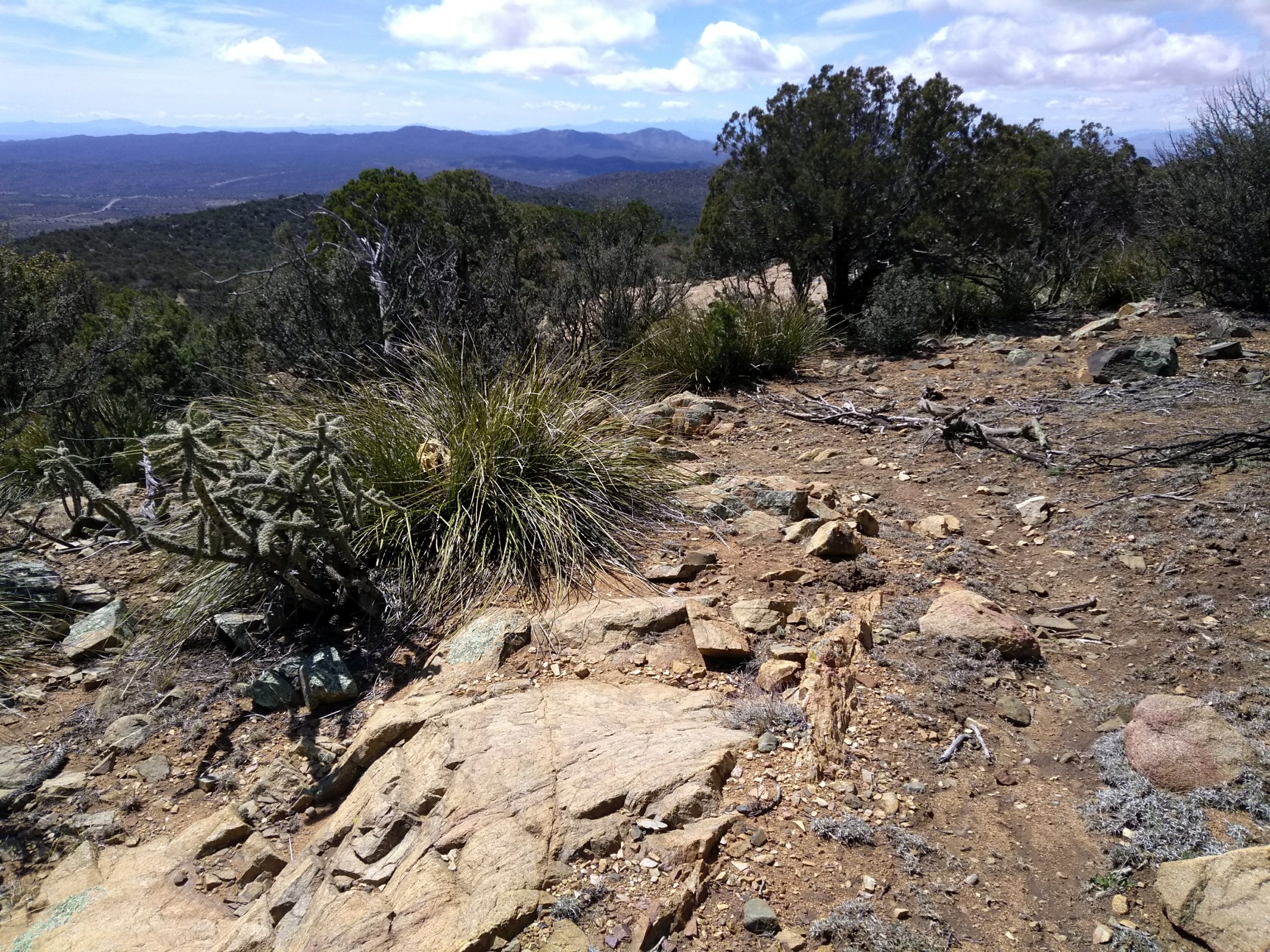 The Gomez Peak Trail System, a popular day use area located in the Gila National Forest a few miles outside of Silver City, was the location of our March 20 hike. Once again we didn’t tackle the peak itself. Most of the trails were pretty tame winding around through the woods. One of the trails was an access trail to the CDT so we got on it and then did a short section of the CDT just to keep the theme going. 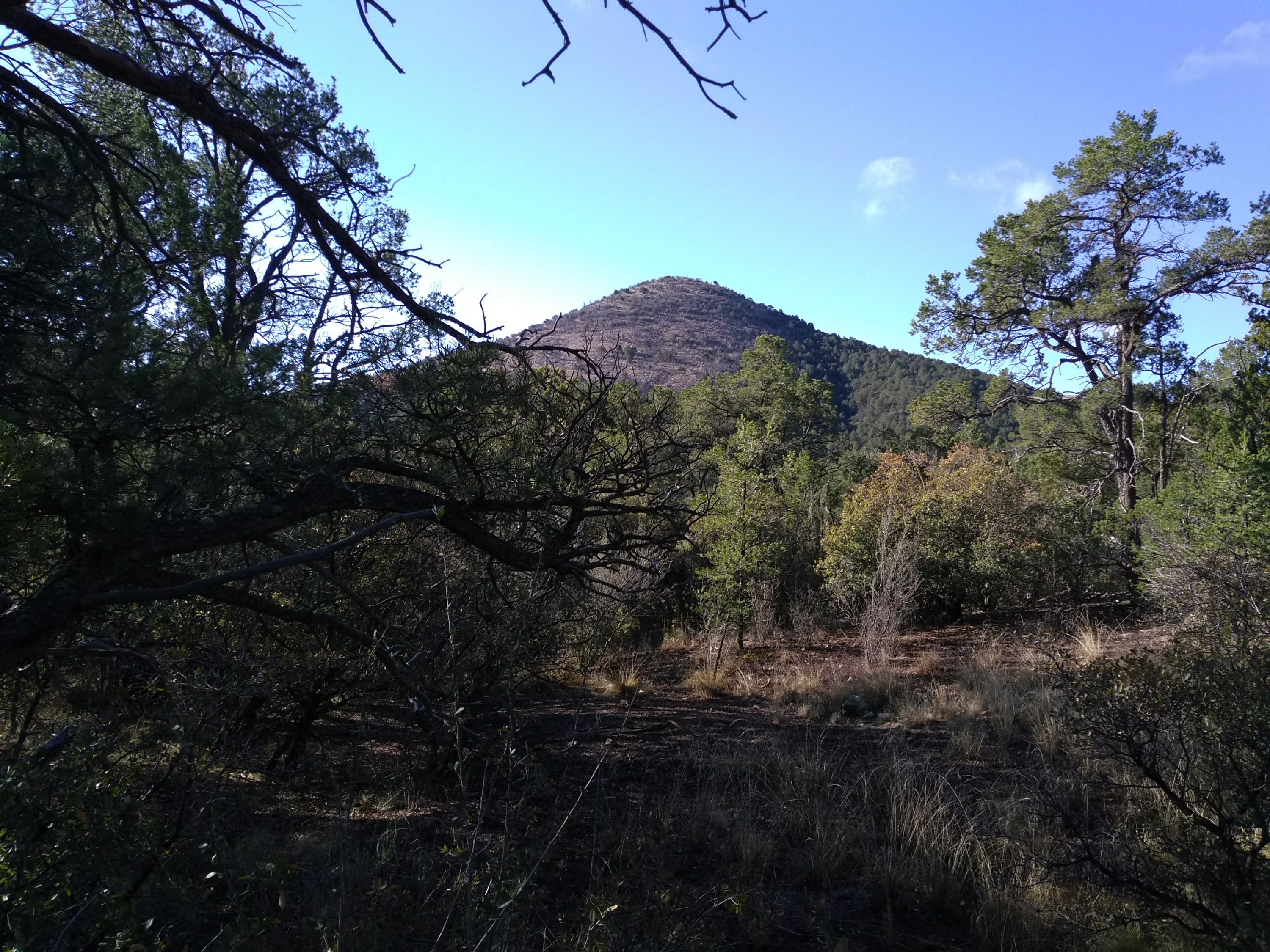 New Mexico’s share of the Continental Divide Trail (CDT) passes through many desolate and deserted landscapes.  On the 7.5 mile hike this day we saw a couple of cows but not a single human being.

We were on the CDT itself only for the last couple of miles.  The majority of the hike went through a badlands area called the La Lena Wilderness Study Area. Until we got to the CDT section there was no marked trail.  Instead,  we were following a GPS track downloaded from the Albuquerque Senior Center Hiking Groups website to a tracking app on my phone.  We found ourselves wandering off track a couple of times but quickly got back to where we needed to be.

In this type of terrain a GPS track is pretty much just a suggestion, anyway.  There are multiple ways to wander around the mesas and eroded rock formations, gaping up at the endlessly interesting shapes silhouetted against the bright New Mexico sky.