A New Mexico hiking destination that had been on our list for awhile was Ghost Ranch, near Abiquiu, New Mexico. Saturday we planned to be in Pagosa Springs, Colorado, for a wedding and decided to combine that trip with a visit to Ghost Ranch. The Presbyterian Church owns Ghost Ranch and there is a large facility there for spiritual retreats and educational events. The trailheads start at the facility and, as long as you check in first, you are welcome to hike the trails.

We drove to Pagosa Springs on Saturday, passing through Abiquiu and Chama, enjoying our first look at the scenery in that part of northern New Mexico. We spent the night Saturday in a comfy, quiet motel in Chama, a 45-minute drive north of Abiquiu. We woke up on Sunday to a gray, rainy day. The waitress at the restaurant where we ate breakfast assured us that the weather was often dramatically different once you started driving south from Chama and just because there was rain there didn’t mean it would be raining in Abiquiu. Her words were prophetic.

As we left Chama the rain began to turn to snow and we soon found ourselves driving through a significant snowstorm. Fortunately, it only lasted about 20 minutes and once we got to lower elevations there was no sign that it had snowed. It was obvious, though, that there had been some rain and, although the clouds were breaking up, we couldn’t tell if the weather was going to clear or not.

When we got to Ghost Ranch we discovered that the Box Canyon and Kitchen Mesa trails were temporarily closed to hikers. Those are the two most popular trails and we had intended to do at least one of those two. We were advised of two other trails that were open and the recommendation was to start with the Chimney Rock Trail because it climbed up on higher ground and would be more likely to have dried out from the rain.

We were almost to the top of the mesa at Chimney Rock when the slight drizzle of rain turned heavy enough that Kevin and Liz got out their rain ponchos. Lee already had on his raincoat. I just trudged along trying to ignore the increasing wetness soaking through my pants and jacket. Since the trail isn’t that long, I knew we could get back before having to spend too much time out in the cold and wet. We obviously weren’t going to be hiking the other trail that we had planned.

The hardest part of getting back was on the portion of the trail on lower ground that had been dirt and sand when we went up. The rain had turned it into a stretch of slick, sludgy mud. We did a lot of slipping and sliding, but no one fell down. I was very thankful that I had dry clothes with me and that there were restrooms in the main facility where we could change before the drive back.

Ghost Ranch is as beautiful as we had been told, even on a rainy day. We will definitely be going back there to hike Kitchen Mesa and Box Canyon and enjoy the views on a sunny day. 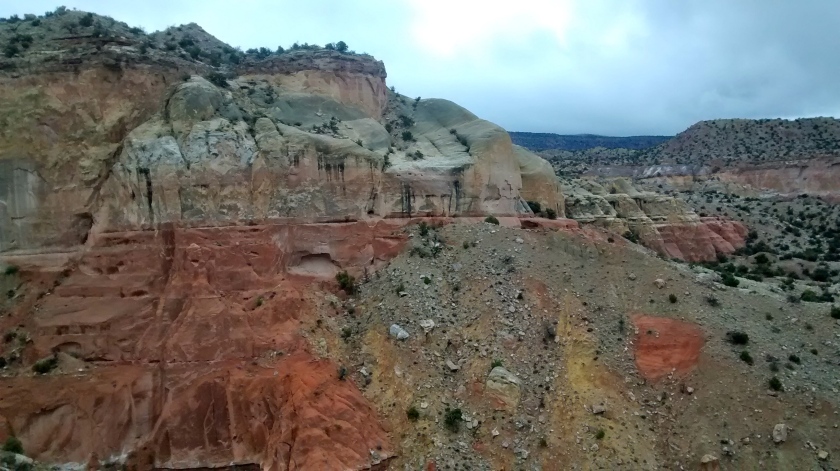 4 thoughts on “Hiking at Ghost Ranch”