For most of the working world in the US, the Memorial Day holiday marks the beginning of summer when kids will be out of school and parents can start making vacation plans. In this year of our extended travel across the US, Memorial Day was a different kind of marker for us. When we left Medford, Oregon, the day after the holiday, our travels across country from east to west officially ended as we turned now back towards destinations in the east.

We continued our leisurely pace of exploration and education, not attempting to make great distances on any given day of travel and avoiding interstates whenever possible. Tuesday we made it as far as Prineville, Oregon, which is northeast of Bend. We took some time on the way to stop at the Newberry Volcanic National Monument.

Wednesday we continued driving through east-central Oregon, stopping for the night to camp at Unity Lake State Park.  On the way we passed through the John Day Fossil Beds National Monument.  Unlike what I had imagined, there was not a place to stop and see a bunch of fossils imbedded in the rocks.  The monument encompasses three separate “units” on several different routes, all passing through scenic and colorful geological formations.  We didn’t want to take the time to visit everything but were impressed with what we saw at the Painted Hills Unit, the Sheep Rock Unit and the Thomas Condon Paleontology Center.
Painted Hills Unit at John Day Fossil Beds

John Day River as it flows through Picture Gorge 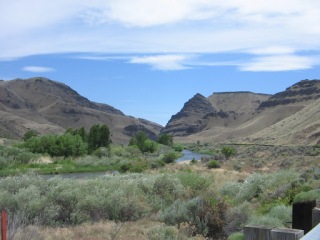 If we had taken the time to hike one of the many trails in John Day we might have seen areas where fossils were visible in the rocks.  Some of those types of fossils were visible in display cases at the visitor’s center, but one surprising fossil that we did see in its natural setting was the Dawn Redwood, Oregon’s official State Fossil.  Instead of being imbedded in a rock formation it was alive with fresh, green spring growth in an irrigated picnic area where we ate lunch.  The sign on the tree explained that fossilized remains of this type of deciduous conifer were common in the Pacific northwest.  The species was thought to be extinct until 1948 when it was discovered to be growing in an isolated valley in central China.  Scientists brought seeds and seedlings back to the US and began a replanting program so that the tree can now be found flourishing in temperate environments across North America and the rest of the globe.
On Thursday we left Oregon behind and made our way to Boise, Idaho, where we visited a nephew and met his wife and 9-month old son.  Neither of us had been to Boise before.  We enjoyed the parklike feeling of the city and the variety of available outdoor activities in the surrounding areas.
Luke, Camden and Sara 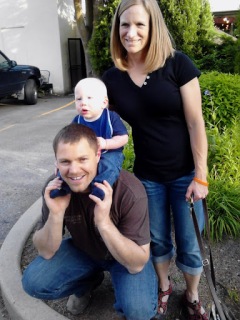 On top of Table Rock

View of Boise from Table Rock 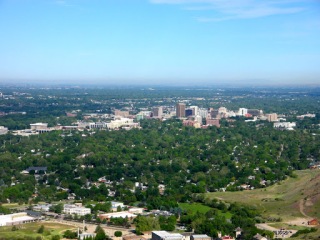 Friday’s day of driving took us from Boise to an overnight camping stop at a state park on the Snake River near American Falls, Idaho.
One of views along Snake River on 1,000 Springs Scenic Byway

Shoshone Falls on the Snake River.  Called Niagara Falls of the West.

Today we drove as far as Rock Springs, Wyoming.  Our goal for tomorrow will be Torrington, Wyoming, for another stop of several days at Barbara’s sister’s ranch.  I almost said that Torrington would be a “rest” stop, but then I realized that when you are a rancher like my sister there is no such thing as rest.  Hopefully, we can find some way to help out while we are there, but, even if we don’t, it will be great to see each other again.