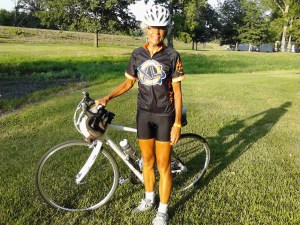 Yesterday's east wind that someone said would bring in rain and cooler temmperatures appeared this morning to have brought only more wind.  The wind today was from the south and, of course, a lot of the route had us heading into the south.  So once again the afternoon part of the ride really stretched the lungs and leg muscles to push against the wind and some uphills, too, that greeted us on the way into Marshalltown.  The temperatures were triple digits, as well.

But now we can rest knowing another day has been conquered.  And what is that sound as darkness falls and we are here in our tent?  Wow, it's actually raining.  And what a wonderful cool breeze the rain has brought.  The forecast is that it won't be a significant amount of rain but it will bring much cooler air for tomorrow's ride.

Before this week had started I had been dreading tomorrow's ride.  It's the longest of the week and 84.8 sounded like an awful lot of miles.  But after strengthening my leg muscles battling the winds yesterday and today I feel more than ready for the challenge. 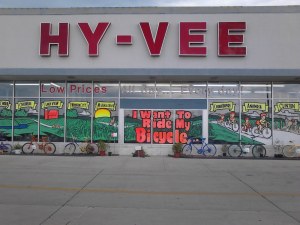 About halfway through the morning, two bicyclists pedaled by and I overheard one of them say to the other: “Well, you know an east wind brings rain and rain brings cooler temperatures.”  I knew that the comment was meant as encouragement because I had looked at the days route map and it showed  virtually all of our 81-mile day's ride was headed directly east.  And at that point the temperatures  were starting to warm up and that old east wind was warming itself up, too, to get ready for a big blow.

And blow it did.  The terrain was fairly flat and the landscape virtually treeless.  There was nothing to break the wind's force and very few downhills to give a break.  Even if there was a downhill a lot of those stretches still required lower gears to compensate for the wind's force.

We encountered one significant downhill into the Des Moines River valley at Lehigh, about 18 miles from the end.  Of course, that was immediately followed by a very long, steep uphill climb, the biggest hill we've seen so far on this year's RAGBRAI.  I was thankful for the shade and break from the headwinds, although I was gasping for air by the time I made it to the top.  A few miles after that there was another hill almost as big as we dipped into and out of the Brushy Creek valley.

And then it was just more of that grueling grind headed into the east wind.  The route map showed a turn about 5 miles from the end town onto a road that headed north.  I thought I would never see that turn but when it finally appeared up ahead I practically cried tears of joy.  I knew the hardest part of the day's work was done.

Just a note about the photo above.  HyVee grocery stores are an Iowa institution and in every town they are so supportive of RAGBRAI.  Thank you, HyVee and, yes, even after a tough day like today I