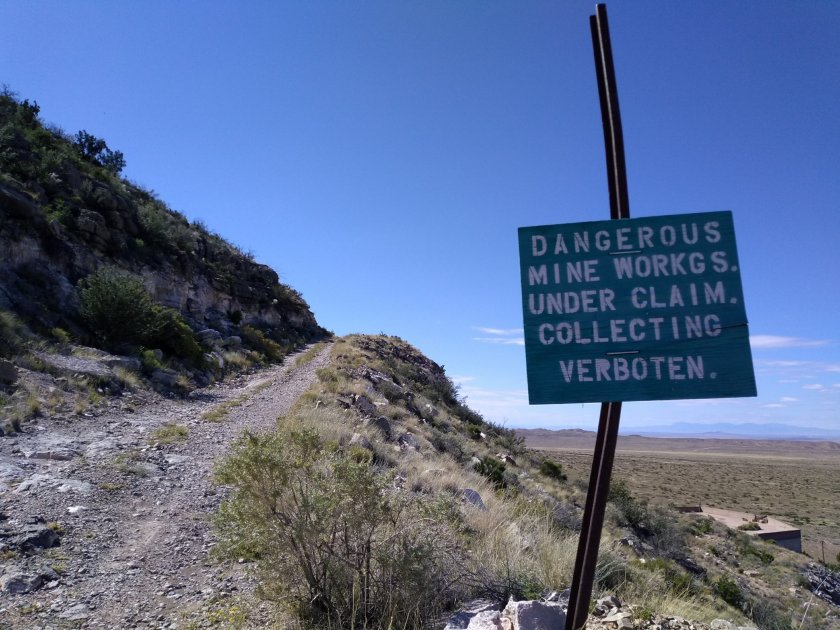 Even before our recent trip to Germany, I think I would have understood that “Verboten” meant I was forbidden from collecting any rocks in this area. So then how was it that I came home Saturday hauling a bucket of rocks up the stairs to our apartment? Well, one of the advantages of membership in the Albuquerque Gem and Mineral Club is the opportunity to go on field trips such as this one that was a visit to a mining claim owned by a member of the club. With his permission and guidance our collecting was allowed.

A number of the group members elected to go on the guided tour of one of the underground workings.

I was more interested in exploring the geology of the area from above ground where there is plenty of fresh air, sunshine and blue sky. This was a part of New Mexico we had passed by on travels across the vast desert just north of White Sands Proving Grounds but we never had occasion to stop there. I couldn’t picture what the area would look like where we would be collecting minerals. It was several miles off the highway, jolting across rutted dirt roads, and as we approached I noticed a range of mountains ahead of us.

As I later learned, the Blanchard Mine is on the western flank of the Sierra Oscura Mountains, an area we never would have thought to explore for a hike because of its remoteness and proximity to White Sands Missile Range property. The base of the mining claim area is accessible without a high clearance vehicle, but the last 2 miles of road up the ridge required four-wheel drive and steel nerves on the narrow ledges. I parked my car at the base and rode up to the top in a more suitable vehicle with some other club members.

A little bit of everything from the collection.

The club member who owned the mine claim gave us an informative talk before we began collecting. I learned a lot about the history of mining in this area and about the geology. One of the most interesting facts was the difference between a patented and unpatented mining claim. If a mining claim is patented then the owner has deed to the land, as well as owning the mineral rights. Unpatented mining claims are usually located on land owned by the federal government. The owner of a patented claim can enforce “no trespassing” on the land, as opposed to this mine which was unpatented and located on BLM land. As the sign said, the public could be prevented from collecting on the site, but anyone could come out and explore the area. That’s good to know for the future when we might want to do some hiking instead of rock collecting. We have limited space in our apartment so I need to focus on enjoying hikes in wonderful, rocky New Mexico, instead of bringing home these irresistible specimens that I’m then struggling to find room for.