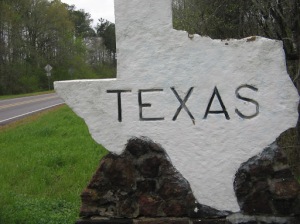 Friday was a milestone day, as we left Baton Rouge, heading west, we crossed over the Mississippi River. It’s a big step in our travels to the West to now realize that we have left the east behind us. We opted for a route that avoided Interstate 10, instead going north into Louisiana to Alexandria, then east into Texas spending the night in Huntsville, Texas.

There were a lot of interesting parks and forests along the way that we would have liked to investigate, but with unending rain and highs barely reaching 50 degrees, the only place I wanted to be was warm and dry in the car.

Saturday was another cold, rainy day. We spent just enough time in the morning before leaving Huntsville to check out the town’s famous statue to Sam Houston. 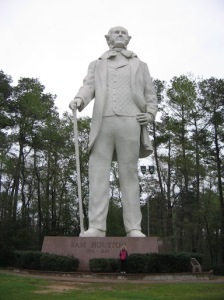 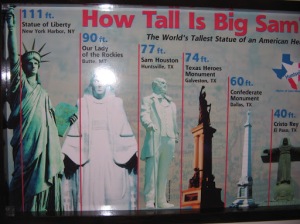 Our goal for Saturday was to reach Austin, Texas, where we had plans for making a one-week stop over. Our previous experiences with one-week stays had lulled us into thinking that we could just show up in a town that had a Value Place hotel and easily find a room for the week. It sure didn’t work that way in Austin. Everything was booked up, it was pouring rain so you could hardly see to drive and the unfamiliar highways had us driving in circles. What we hadn’t realized was that March 9-18 tens of thousands of people from all over the world show up for Austin’s South by Southwest Music Conference and Festival (SXSW).

We finally found a place in the town of Round Rock, north of Austin. Sunday afternoon the skies cleared, giving us the opportunity the last couple of days to see some of the sights in the area.

Round Rock has an interesting history from the days when the West was being settled. Its name was derived from the table-shaped stone in the middle of Brushy Creek. Indians and early settlers used the stone as a guide that marked an important low-water wagon crossing. Round Rock was a part of the Chisholm Trail on the route from deep in the south of Texas to cattle markets in Hays, Kansas. Numerous cattle drives, with thousands of longhorns in the herds, passed through Round Rock during the post Civil War period.

We have taken a couple of drives from our hotel in Round Rock into the downtown area of Austin. We played tourist at the Texas Capitol one day and rode our bikes on the Town Lake Hike and Bike trail another day.

There are also a couple of other bike trails in the surrounding communities that we investigated.


The weather is quite unpredictable so we are trying to balance the outdoor activities with other things. There certainly is a lot going on and we won’t be bored in our time here.

One thought on “Texas Travels”