Literally, it’s freezing. Last night and the night before the temperature here in Ocala dropped down to a frigid 26 degrees. I know, for those of you in the Midwest and Northeast that’s not cold at all. But our blood has thinned since we’ve been down here and I didn’t expect to go out and have to scrape frost from the windshield of the car while in Florida. One thing for sure, I’m glad that we are in a warm hotel room and not out in a tent in the Ocala National Forest.

Given the weather conditions, we have temporarily delayed our plans to camp and have been spending more time investigating outdoor activities in the Ocala area. The Cross Florida Greenway trail has a section that passes through Ocala. One day last week, looking at a map, we were able to find a way to ride our bikes from the hotel room to the Teak Way Drive Trailhead. 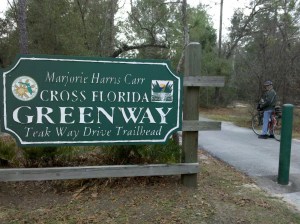 This area of the Greenway has a 3 mile unpaved hiking section through the Marshall Swamp, as well as a section of 3 paved loop trails that we could ride our bikes on.

In contrast to the 110-mile Greenway trail, which is mostly unpaved the Withlacoochee State Trail, at 46 miles, is the longest paved trail in Florida. The Citrus Springs trailhead is about an hour’s drive from Ocala and the day that we did some biking there we were joined by our friend, Jerry. 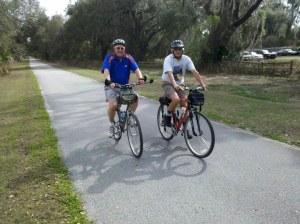 We weren’t prepared to do the whole trail, but, instead pedaled 16 miles south to Inverness, where we had lunch downtown, before pedaling back. 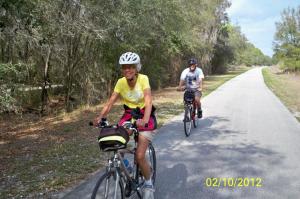 When we were here in January we had made a short visit to the Silver Springs State Park that is just outside Ocala. It was late in the day and we only had time to hike a short trail before the park closed. Also, it is only on weekends that the museum at the park is open to visitors. So on Saturday we made another visit, which allowed us to tour the museum and walk a couple of other trails.

We learned more about the Silver Springs area at the museum and were especially interested in the information about films and TV shows that were made here over the years. These included six of the original “Tarzan” movies filmed in the 1930s and 1940s, “The Yearling,” starring Gregory Peck and Jane Wyman that was filmed in 1946, “The Creature from the Black Lagoon” in 1954, and more than 100 episodes of the famous television series “Sea Hunt,” that starred Lloyd Bridges.

Silver Springs is the site of one of the largest artesian spring formations in the world, producing nearly 550 million gallons of crystal-clear water daily. In the mid-1800s tourists flocked by steamboat to see the crystal-clear waters of Silver Springs. In 1878 when Hullam Jones invented the glass bottom boat, its popularity soared, laying the groundwork for a flourishing tourist industry here. In the 1920s, Carl Ray and W.M. Davidson made the land around the headwaters of the Spring into something resembling the attraction that is there today, now known as the Silver Springs Nature Theme Park. The attraction features native animal exhibits and glass bottom boat tours of the springs. Since it is a separate, privately-owned concession, with a steep price tag we did not go to the theme park. Instead, we walked a couple of the trails that we hadn’t seen when we were first here. At the end of the Swamp Trail a viewing platform allowed us to peer over into Silver River, where we got a sense of the beauty of this clear water that allows you to see the sandy bottom, and many fish swimming through the grass and reeds.

The viewing platform was the one spot where we also finally saw some wildlife. Since leaving the southern part of Florida we haven’t seen many birds or other creatures of interest. On the platform we saw an alligator, a great blue heron, ibises, turtles, cormorant, and many fishes.

The other exciting viewing of the day was in the woods on the way back. I had heard that there were armadillos in Florida but had only caught a glimpse of one from a distance. This time we came upon one that was so busy snuffling his way through the leaves looking for his lunch that he was oblivious to me standing there with my camera. 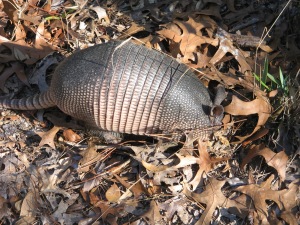 I thought he might walk right over my foot. Armadillos don’t look like they can move very fast but when he finally became aware of our presence he scampered off in a flash.

Now it’s time for us to scamper off and leave Ocala behind. We hear that the weather will warm back up to more normal temperatures in a couple of days. Until then we will continue to hotel and sightsee and then, depending on whether or not we have strayed too far from Ocala, we may circle back and do the camping we had hoped to do in the Ocala National Forest.

We were getting spoiled by this winter’s drought conditions in Florida, fooling ourselves into thinking that every day was going to be sunny and warm. On Monday evening this week we experienced the first rainfall of our time here. It didn’t rain on Tuesday, but that day was a first because it was a day when the sun remained behind clouds and never appeared the whole day. The weather front that brought the rain has been followed by some cooler temperatures. We are having to adjust our “sunny and warm” expectations a bit, but the weather is still plenty warm enough for our continued enjoyment of Florida outdoors. We have seen signs of spring, such as this redbud tree, which we would not expect to see in Virginia for at least another 6 weeks.

So far this week we have visited a couple of state parks, checked out one bike trail and walked some trails in nearby Ocala National Forest.

The bike trail was a small piece of the Cross Florida Greenway trail that stretches from the Gulf of Mexico to the St. Johns River. Most of the Greenway is unpaved and more suitable for off-road cyclists. We drove to Inglis to ride the one section that is asphalt. It traverses 5 miles west to the Gulf of Mexico, paralleling the former Cross Florida Barge Canal. 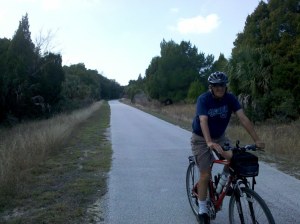 Viewing platform into one of the salt marshes along the trail as it approaches the Gulf.

The end of the trail at the Gulf of Mexico. 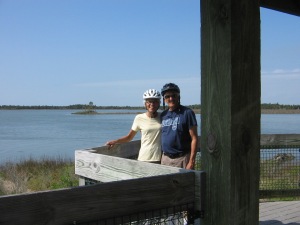 Our exploration of the Ocala National Forest started at the northwestern section nearest Ocala and included driving across the northern section to Salt Springs on the northeastern side. Along the way we stopped to walk the 2-mile Lake Eaton Sinkhole Trail, followed by the adjoining 2-mile trail that led to Lake Eaton. The sinkhole is an 80 foot deep, 450 foot wide dry sinkhole.
An observation deck allows a view of the sinkhole and there are stairs leading down into the sinkhole.

We learned how sinkholes are formed and read that Lake Eaton, as many of Florida’s lakes, is itself a sinkhole that has filled with rainwater.

One of the viewing platforms at the edge of Lake Eaton. 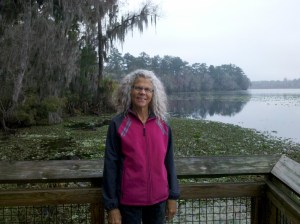 When we were in Salt Springs we looked at the campground there and noted that it would be a good location for a couple of days of camping next week, if the weather permits. We found a trail outside of town that led to a wildlife observation platform on Salt Springs Run.

Yesterday found us driving once again to the west of Ocala. Our first stop was at the Crystal River Preserve State Park. We found a 7-mile loop trail that was suitable for bikes and allowed us to see the variety of habitats that are within the preserve area. 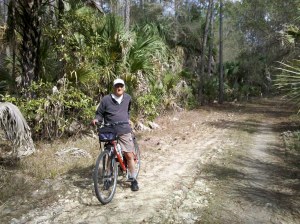 The Homosassa Springs Wildlife State Park that we visited next was not the type of park that we are used to seeing. The park’s mission is to showcase native Florida wildlife, but not wildlife that is living “in the wild.” Most all of the animals have been rescued and rehabilitated from situations where they would not have survived if left in the wild. Walking around the park is similar to the experience of visiting animals in the zoo. But it is a beautiful environment and an educational experience. I’m not sure where else, besides as plastic lawn ornaments, we would have been able to see flamingos. 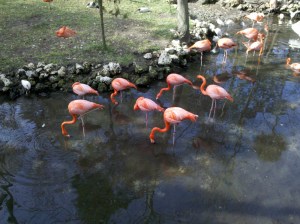 My favorite “wildlife” sighting was at feeding time for Lu, the resident hippopotamus. Nice to see a huge, lazy munching critter that was not a manatee. In fact, the story of Lu and how it fits into the park’s history, is quite interesting.

In the 1960’s the original development of the park was as a privately owned tourist attraction to house exotic animals like lions, tigers, monkeys, etc. When the state bought the property for a park in the 1980’s the intention was to only have animals that were native to Florida; new homes had to be found for all the animals that were not native. Unfortunately, no home could be found for poor, old Lu, the hippopotamus. Hundreds of local residents sent letters to Florida’s governor, asking him to allow Lu to remain at the park. The kindhearted governor came up with a way to make it possible for this African beast to remain in a park that is for Florida wildlife. Lu was declared to be an Honorary Citizen of the State of Florida so he could live out his days at the park.

Even with the occasional cool and overcast day, I think living out your days in the beautiful state of Florida sounds like a pretty good way to go. But with many travels and adventures that await us in the months ahead it remains to be seen what state Lee and I will end up calling home.