When I suggested to Lee that we hike the Pino Trail, I was remembering it as a moderately strenuous 3 1/2 mile climb to the South Crest Trail. I knew that we had done it more than once before, but didn’t bother to look up the details from previous hikes.

The first time that we did it was 6 years ago at the end of October just before we moved into our apartment. Then in January of 2014 I hiked it with 2 friends during one of the times when Lee was housesitting for his brother in Ohio. That hike adventure is documented in a blog posting. . In September of 2016 Lee and I did the hike again, which meant yesterday was the fourth time for me and the third time for Lee.

If I had looked up the hike details in advance I might not have been so hasty to suggest the hike yesterday. It’s actually 4 1/2 miles to the Crest, making a 9-mile hike with 2000 feet of elevation gain. The last few months have been busy with travel and the hiking we have done has been mostly short hikes. We probably weren’t in as good of shape as the other times we hiked the Pino Trail.

Hiking in summer, instead of fall or winter, makes an additional challenge. The first mile of hiking is in the foothills with no tree cover. We had gotten a start early enough in the morning that lack of shade was not a problem in the beginning. It was that last mile coming back down in the heat of the afternoon that had us panting for water. I had forgotten how much of the trail crosses open areas even after you get to the higher elevations. We both had taken our usual amount of water, but we really should have taken some extra because our bottles were empty before we got back.

An unexpected benefit of an August Pino Trail hike was to see many different wildflowers in bloom. It has been such a dry year that we had given up on seeing the array of Sandia Mountain flowers we usually look for on our spring and summer hikes. But even though the rain here in the valley has been scarce, apparently those afternoon thunderclouds we observe over the mountains have provided some moisture. As we got to the higher elevations, there were our old friends. Purple Geranium, Harebells, Red Columbine, and Birdsbill Dayflower were the most plentiful. There were many others that Lee could tell you about. And he could show you flower pictures much more professional than my poor attempts to capture a bit of the beauty.

The day started with a field trip organized by the Albuquerque Gem and Mineral club–my first field trip since joining the club. The meeting spot was a 2-hour drive north of Albuquerque, near Abiquiu, which meant we had to get an early start. The morning clouds hadn’t yet cleared and as we drove by Santa Fe we encountered a brief flurry of snow.

The field trip required a short walk up an arroyo to the site of an abandoned flourite mine. A member of the group showed us a couple of samples and gave some pointers on what to look for. Lee and I weren’t very serious about collecting specimens but enjoyed poking around in the rocky hillside picking up a few small samples to keep.

After about an hour the day began to warm up with the promise of good hiking weather. It was a short drive to Ghost Ranch, where we had hiked once before. There were a couple of other hikes there that we knew about, so after a stop at the Visitor Center we decided to do the 5-mile hike that goes up and back down Kitchen Mesa. It was a good choice–perfect weather and wonderful views from the top of the mesa. 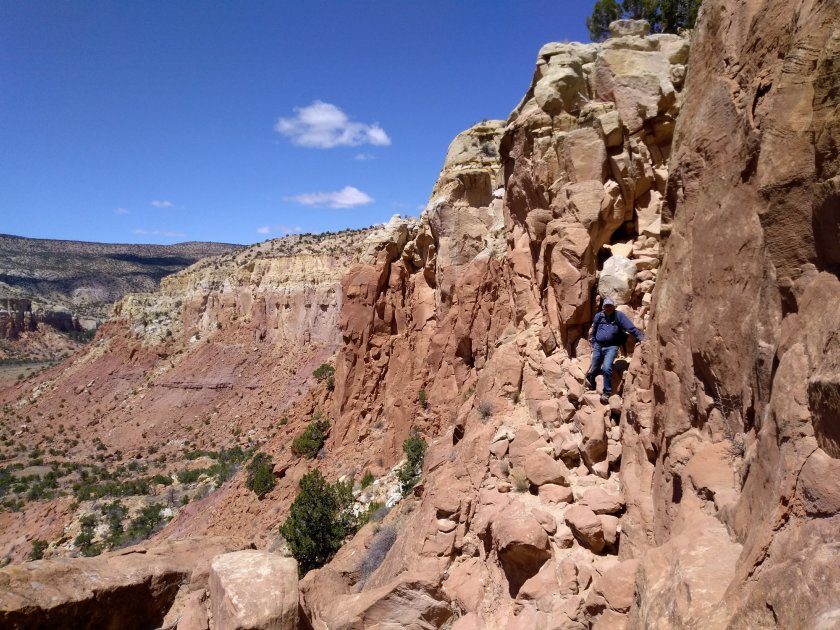 The trail goes around the back side of the mesa and doesn’t get too steep except for the one spot near the top that requires squeezing through a narrow rock chimney. 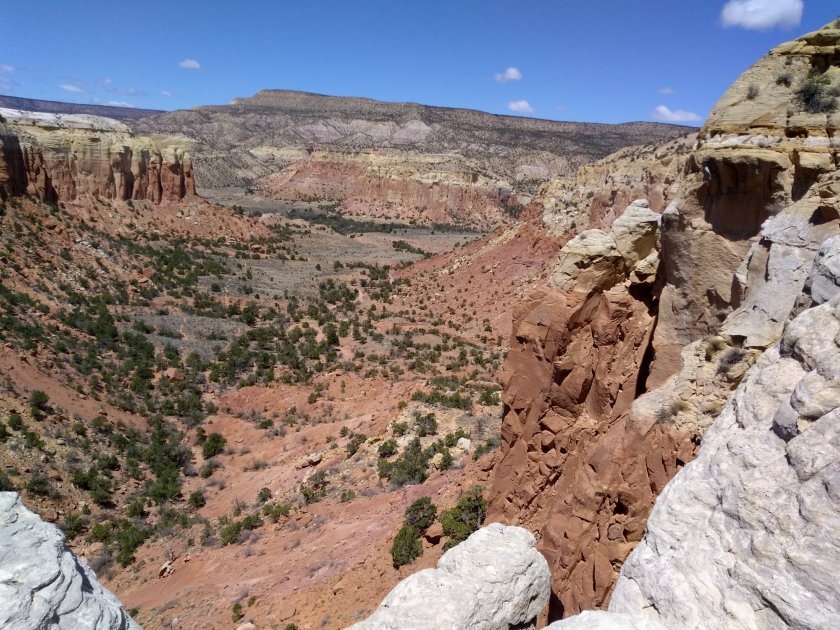 From the top you can look down at the buildings of Ghost Ranch and off in the distance Abiquiu Lake is visible. We had never gone down to the lake so after the hike we took a different road home that circled the lake and then cut over to join Hwy 550 at Cuba. New sights to see, as well as some old favorites–a perfect way to spend Earth Day.